As a freshman, Sewit Belete remembers sitting down at a “mighty groups” conversation organized by the Mizzou Students Suicide Prevention Coalition (MSSPC). Waiting for it to start, Belete thought she already had a good idea what people would say.

The group was small by design, about eight people. The same participants would meet every other week to talk about mental health issues. The hope was that students would be more open in a small, familiar setting.

Belete, from Blue Springs, Missouri, had been in counseling since she was 14. She started going, at the insistence of her mother, soon after her older brother had attempted suicide.

Her mother’s behavior represented a change of attitude in the family. Belete’s parents had immigrated from Ethiopia, and in their culture, mental health isn’t discussed. Growing up, the subject wasn’t explicitly taboo, Belete says, just ignored.

“That [suicide attempt] was our first wake-up call that mental illness is real, it’s a thing and there needs to be a conversation,” Belete says.

She had assumed that if even her family was open about mental illness, surely everyone else’s was, too. So Belete was shocked when, in her mighty group, she discovered her assumptions were all wrong.

“Hearing even seniors talk about how they were hesitant to seek help broke my heart,” Belete says. “They felt ashamed to.”

Belete was not an officer of MSSPC. She wasn’t even a member. She’d simply attended an event on a topic she cared about. And she came away wanting to learn more.

That meeting got Belete thinking, and she soon discovered that not every culture treats mental illness the same. In Argentina, for instance, counseling is very common, and it’s culturally acceptable to talk about your feelings. The country also has the most psychologists per capita of anywhere in the world.

Belete is a junior in human physiology and translational science in the College of Human Environmental Sciences, but her goal was always to go to medical school and become a psychiatrist. She had come to Mizzou knowing she wanted to study abroad. Now she knew where she wanted to do it.

She applied for and was accepted into a semester-long study abroad program in Argentina. She also applied for scholarships to help defray the cost. She was selected for the Bond International Scholars Award, a $5,000 study-abroad scholarship created by friends of former U.S. Senator Christopher S. “Kit” Bond.

Belete’s semester at the Universidad del Salvador in Buenos Aires wraps up this month. The trip wasn’t without challenges (learning enough conversational Spanish was difficult), but the experience has been everything she’d hoped for.

“The first time I arrived at my host family, she talked about how she goes to therapy and takes medication — it’s like her whole life story,” Belete says. “I knew there was a different cultural attitude, but it’s different being in the atmosphere where it’s expressed.”

Belete says she feels a new enthusiasm for psychiatry. “I was passionate before, but now I’m even more passionate, just seeing the impact psychiatrists are making on this country and knowing in a few years I’ll be able to make the same kind of impact.”

After her brother’s suicide, Maddie Churchill decided to step out and help end the stigma around mental illness. 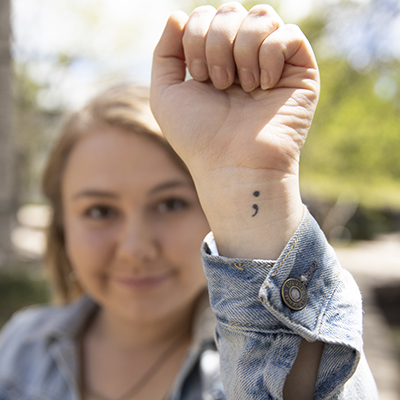 Stories Behind the Semicolon

Individuals around the world have semicolon tattoos, representing their own experiences with mental illness or their support for others.

Olivia Hunt took a patient approach to finding her major and her niche. Now she’s in France on a $5,000 study-abroad scholarship.