Roughly 900 Mizzou students have non-apparent disabilities. That is, they have neurological or psychological conditions or learning disabilities that are not immediately apparent to casual observers. Nonetheless, these disabilities are very real.

We recently spoke to three Mizzou students with non-apparent disabilities and asked them to share their stories as part of Mizzou’s ongoing effort to demystify disability.

Emily Martin had just finished the Jump Rope for Heart challenge when her first migraine hit. She was in fifth grade. “I thought I was dying,” she remembers.

More migraines came a year later. With medication, she kept them at bay until high school. Then, during sophomore year, Martin developed daily hemiplegic migraines, which mimic the symptoms of a stroke. She missed so much school that she withdrew to be homeschooled. She didn’t return until senior year.

For college, the Oakville, Missouri, native went a year to St. Louis Community College, then transferred to Mizzou to major in biology.

During a doctor visit over the summer, her doctor suggested she explore any accommodations Mizzou could make for her. That’s when she discovered the Disability Center.

The center helped in several ways. For instance, during tests Martin is allowed to wear a wide-brimmed hat, which shields her eyes from light and glare. Also, the exam questions are written in large print on blue-tinted paper, which reduces eye strain.

Perhaps the biggest accommodation has been extra time on exams. Tests are stressful, and stress is a migraine trigger. To manage the pain, Martin does a breathing exercise — breathe in for four beats, hold for seven, exhale for eight. Doing the exercise helps, but it takes time away from answering questions, making the extra time critical.

“It’s meant everything, just putting those accommodations in place,” Martin says. “That little bit of help has allowed me to do the work to get where I need to be.”

Martin expects to graduate in December 2019 with a double-major in biology and psychology. She knows she wants a career in medicine, but she isn’t sure if she will choose medical school, a physician’s assistant program or paramedic training.

Since 2017, she has worked part-time as an emergency medical technician for Cole County, Missouri, going out on medical calls with paramedics. She likes using her skills during psychiatric calls where someone is in distress, unable to cope and is acting out.

“I just love comforting them without medicine,” she says. “I walk them through the breathing exercise — if it’s a kid I’ll give them a stuffed animal to squeeze during the breaths.”

Sometimes the patients will marvel to her at how she knew just what to do or say.

Martin, however, doesn’t find it that surprising. “Anyone who has an experience of going through something like that has a better idea of what the person needs,” she says.

The flight attendant brought John Eccleston’s drink to him near the beginning of his long flight home from a short-term study abroad trip in China. “Xièxie,” he said, taking the cup from her. He was hours into the flight before he realized he was saying “thank you” in Chinese to the American airline crew.

The experience was possible for all of the students because of Mizzou’s strong study-abroad program. For Eccleston, it was also possible because of the MU Disability Center, which ensured that he had the accommodations he needed for his studies and exams even while he was half a world away from Columbia.

Eccleston has attention deficit disorder, which makes it difficult for him to focus and tune out distractions. He gets note-taking assistance, receives extra time on exams and takes exams outside the classroom in quiet rooms provided by the Disability Center.

It’s part of the the reason he chose Mizzou. While in high school, Eccleston toured several colleges within driving distance of his Chicago-area home. At each campus, he asked what accommodations they could make for him. The reception he received and the answers he got varied.

“Mizzou was the most welcoming,” he says, and he clicked immediately with the access adviser he met. “He was one of the reasons my mom was comfortable sending me six and a half hours away.”

With accommodations in place, those barriers that might have kept Eccleston from succeeding were gone. And the business major with a minor in leadership and public service has been able to thrive.

Eccleston has taken several classes through the MU Office of Service Learning, which gave him the opportunity to tutor refugees from Eritrea, a country on the east coast of Africa, and it led him to intern with the Missouri Department of Economic Development, where he has worked in the energy division since August 2017.

He is interested in a public policy career at the state or federal level that promotes economic development and energy sustainability, particularly as it relates to infrastructure and climate change.

Sophie Endacott has always liked the idea of being a veterinarian, but the thought of having to put an animal down was enough to make the junior in health sciences aim for medical school instead. The pull of her four-legged friends has proved too strong, however.

“I just want to help them and the people who care for them,” the Nixa, Missouri, native says. “If they’re sick, they can’t help themselves.”

Her appreciation for animals has only grown in the past two years since she started using a service dog, a disability accommodation she arranged through the MU Disability Center. The dog was a family pet — a golden retriever and Great Pyrenees mix named Hudson — that she had trained to be a service dog. “He’s been perfect,” Endacott says.

Bringing a service dog to campus and into class with her has helped Endacott perform at her best, but it has also led to challenges.

“A lot of people try to pet my dog or do things to distract him,” Endacott says. “I know most people just love being around animals, but what they don’t realize is that by distracting him, he’s not able to do his job for me.”

Sometimes, she says, people will talk to Hudson and ignore her; they’ll take her picture without permission or explanation; or, because they can’t see a visible disability, they’ll accuse her of faking one to bring her dog with her to class.

Most of the time, though, the awkwardness stems from people simply not knowing how to behave around someone with a service dog.

Endacott has some advice:

The Disability Center provides reasonable accommodations, auxiliary aids and support services to ensure that students with disabilities have equal access to the educational programs and activities offered by the university. Learn more about the Disability Center. 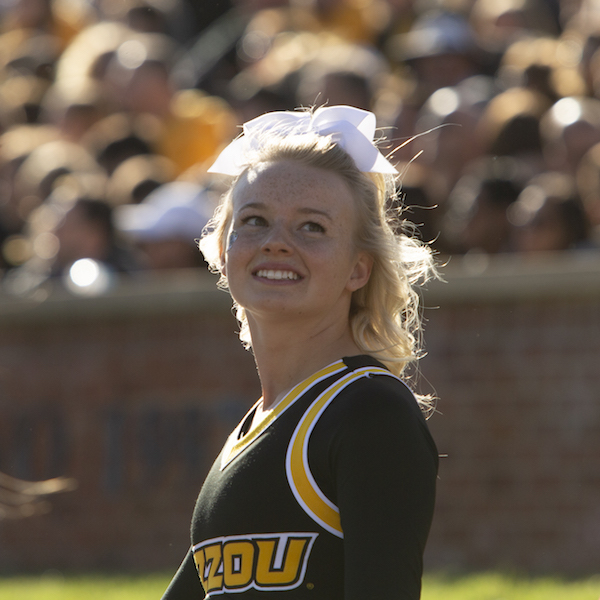