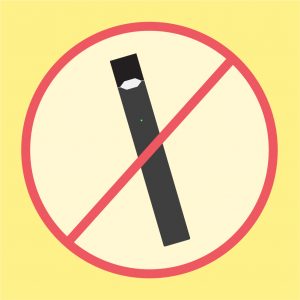 Giving up smoking or other nicotine addiction can be a lonely struggle. For MU students who want to quit, there are resources on campus that can help.

One School of Medicine student, who asked not to be identified, turned to these resources on her journey to quitting.

“I was starting to work with patients who had substance use disorders and nicotine addictions,” said the student, “and I felt like I couldn’t recommend for my patients to stop smoking if I was doing it myself.”

She started smoking cigarettes her freshman year and switched to electronic cigarettes when she was a senior. When she was in medical school and continuing to use e-cigarettes, she felt “truly addicted,” waking up in the mornings with strong cravings.

“I have ADHD, so I was kind of self-medicating my attention deficit with nicotine,” she said.

Services are available to help you quit or reduce your use of nicotine products, including cigarettes, electronic cigarettes, and smokeless tobacco. Learn more about quitting nicotine.

In the short-term, nicotine seemed to help her focus while studying, but she feels studying so regularly was largely why she got hooked.

The med student first tried to quit without help. She then turned to the Student Health Center and was prescribed bupropion, known by the brand name Wellbutrin. The medication is an antidepressant with smoking cessation applications. In studies, staff physician Aaron Sapp says, it seems to reduce cravings.

Bupropion helped the medical student quit for longer. However, when she started using again, she scheduled a one-on-one coaching appointment with Michelle McDowell, the substance abuse prevention and education coordinator at the Wellness Resource Center.

While McDowell can’t prescribe medicine like the Student Health Center can, she helps students come up with ways to adjust their behavior based on their triggers.

The med student’s primary trigger was studying, so she worked with McDowell to devise alternative actions for times she was most likely to smoke.

“When I’m craving nicotine, maybe I’ll have a healthy snack or I’ll take the dog for a walk,” the student said, describing the alternative actions she took to distract her mind.

“Rather than smoking or vaping, you can use sunflower seeds or a fidget spinner,” McDowell said. The med student found using a stress ball while studying helpful.

McDowell also offers nicotine replacement therapy. It counters withdrawal symptoms by providing users with controlled amounts of nicotine in patches, gum or lozenges. The medical student found the patches the most effective at beating her cravings.

Using McDowell’s advice, the student hasn’t used nicotine since last October. However, Sapp says it typically takes users seven attempts before quitting for good. He and McDowell believe it’s the effort to keep improving that matters.

“If they leave my office, and they give it a try, then we’ve at least made progress,” said Sapp. “Each little bit of success builds on the success before it.”