One Step at a Time

“I always know that I have a group of people I can trust to help me out with anything.”

During his first year at Mizzou, Zach Jones became a resident advisor with the Department of Residential Life. This was one of many steps that helped transform Jones from a shy freshman into an outgoing leader who strives to inspire others.

Jones said that his RA experience provided an opportunity to be more outgoing and build relationships with other students.

“Having to go interact with people kind of broke me out of my shell,” he said, “but also helped me understand the importance of not just being to yourself.”

Mizzou Black Men’s Initiative (MBMI) also had a big impact on Jones during his freshman year. The organization gave him the academic and positive support he needed.

“What MBMI did was really just put me in an environment where positivity was just bred,” Jones said. “Go study harder, go get involved more and just the support that we got for each other.”

MBMI also introduced Jones to a mentor who shared some important advice about involvement.

“He told me to ‘buy in’ into the program,” Jones said. “He said the more I listened, the more I trusted and the more I valued MBMI, the more I would get from it. This inspired me to value every relationship and every second I had with the program.”

Jones’ mentor was a member of Alpha Phi Alpha Fraternity, Inc., and encouraged Jones to research the fraternity. After learning that Alpha Phi Alpha shares Jones’ values, he became an official member.

Jones said the brotherhood and support from his Alpha Phi Alpha brothers have enhanced everything about him.

“I can tell them anything good, bad or ugly without worrying about being judged, but I know that whatever the situation is, they’re going to want me to succeed and have the best outcome objectively or subjectively,” Jones said. “I always know that I have a group of people I can trust to help me out with anything.”

Jones said that being a member of Alpha Phi Alpha has given him a platform, and he must always set a good example for his community.

Fraternity & Sorority Life
Fraternities and sororities have been an integral part of student and campus life at the University of Missouri for nearly 150 years. The University of Missouri is committed to partnering with students, alumni, national headquarters and various stakeholders to ensure that fraternity and sorority members thrive. Learn more about Fraternity & Sorority Life.

In 2019, Alpha Phi Alpha competed in the National Pan-Hellenic Council Homecoming Step Show. It was Jones’ first step show, but he had confidence in Alpha Phi Alpha’s routine.

After an amazing performance, Alpha Phi Alpha won and received a $1,000 reward. Jones was excited to share the victory with the brothers who helped shape him into a different person.

“It really helped me gain a deeper sense of what it means to be vulnerable with people and how, like, building real deep relationships with others enhances your experiences with them,” Jones said. “Alpha has definitely shown me how to take charge and take initiative in my life. I can honestly do whatever I want to do. It’s just a matter of manifesting my own destiny.”

Since joining Alpha Phi Alpha, Jones has become even more involved on campus and hosts community service events with the fraternity. He also continues to stay involved with MBMI as a teaching assistant. 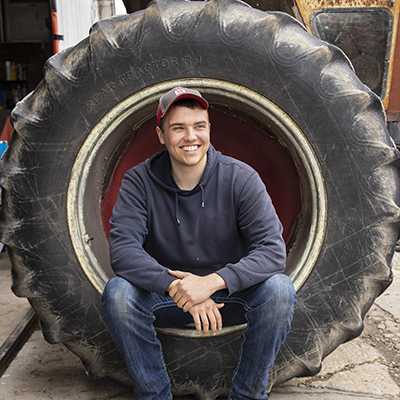 Fraternity life bridges the gap between Gavin Spoor’s focus on studies and building his popcorn farm.

An MU alum’s family gets life-changing experience with the help of volunteers from Kappa Kappa Gamma.